I came across a maldoc recently which uses strings stored as values of various OLE form fields to build an executable file. It also constructs various commands to drop and run the executable in the same way. The maldoc is probably related to Lazarus Group, but this post is not about attribution.

A total of 70 form fields stored as Caption, Tag, Text or ControlTipText values of various control elements (like TextBox, CommandButton, ScrollBar etc.) embedded across four parent Form controls are present in the maldoc. These values are concatenated (at times, after an StrReverse() operation) in the VBA macro to build a hex string of the executable. Similarly, the macro also builds multiple text strings which are passed as parameters to functions responsible for creating the executable file on disk and executing it. 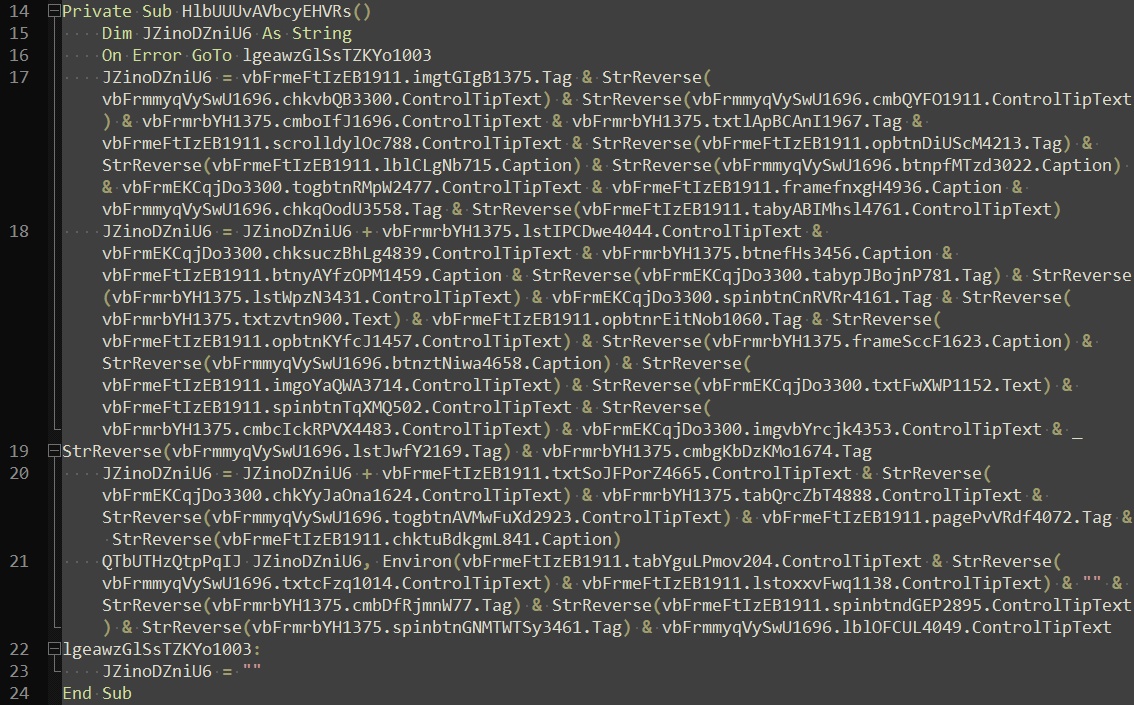 Extracting these strings is, of course, possible by running the macro code in the Office VBA debugger and setting breakpoints at appropriate locations. However, I endeavoured to extract the strings “statically”.

Considering that VBA maldocs are very common initial infection vector for all sorts of malware, I expected this task to be simple enough and hoped to easily find tools with capability to extract form field values from embedded controls. It was surprising, therefore, when it took me considerable effort to do this properly.

This post hopes to be useful to others attempting something similar.

Search for a solution

Didier Stevens, author of multiple excellent tools including oledump, in an old Twitter thread suggested extracting the values using strings on the OLE stream after one has located the name of the corresponding control element. This does not seem particularly enticing to do (or automate) 70 times, and will actually not work in certain cases mentioned later in this post where the name of the control element and the values of some of its form fields are stored in separate streams.

In the same Twitter thread, Philippe Lagadec pointed to a component of their oletools project named oleform.py which contains the code to parse the OLE form streams and extract form field values.

The function extract_OleFormVariables() of oleform takes an OLE file and a stream directory as parameters and returns a list of dictionaries containing {field_name: value} pairs for each form control in the stream. The oletools project however does not contain any interface to use extract_OleFormVariables() directly on an input file. A call to the function exists in extract_form_strings_extended() function of olevba.py, however this function itself is not used anywhere.

I wrote a simple wrapper to call extract_OleFormVariables() for the maldoc and see if it works. 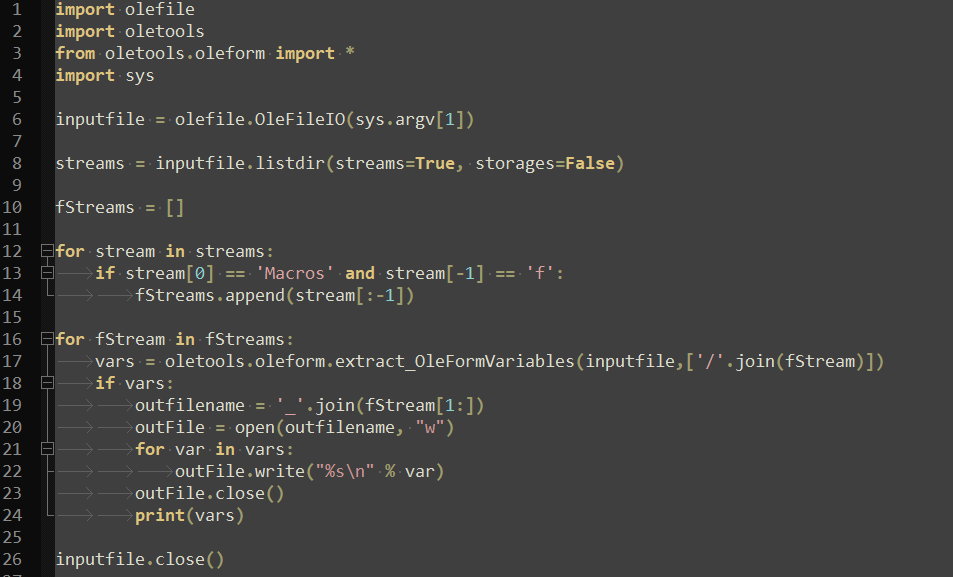 Many of the output values were prepended with 1-3 bytes of seemingly junk data. These bytes are not present when the form field value is viewed in Word or LibreOffice Writer. An equal number of bytes were also missing at the end of the value in these cases.

This indicated presence of a bug in oleform, which I decided to try locating and fixing. After some debugging and going through MS-OFORMS, I found the bug. The properties Name, Caption, Tag, Text, ControlTipText etc. of various controls are all of type String (specifically an fmString). These strings are padded to multiples of four bytes in the OLE stream. oleform did not consider this padding in String values while parsing the stream.

The bug is understandable as the fact that the strings are padded is not mentioned anywhere in the description of any controls in MS-OFORMS. Rather, it is only mentioned briefly at the end of section 2.1.1.2.4 - Padding and Alignment:

After adding code in oleform that takes care of padding while reading string values, I ran my wrapper again.

This took care of those extra junk bytes and it seemed that my work was done. Not quite!

I soon discovered that some of the controls had a Caption property (called Label in LibreOffice Writer) which was not extracted by oleform.

All these controls had ClsidCacheIndex value of 14 indicating it is a Frame control - i.e. a control embedded in a parent Form while having child controls of its own. (section 2.1.2.2.2 - Embedded Parents)
In such cases, the OLE stream directory contains a child “i” stream which contains the missing Caption property. (and can contain additional properties)

I added a function consume_EmbeddedFormControl() in oleform to handle this case for controls having ClsidCacheIndex value 14. The function only extracts the Caption property as that was enough for this maldoc.

Finally, I had all 70 form fields needed to construct the executable Hex string and other text strings.

(Update 2022-06-30): I submitted a pull request for merging these changes into oletools.

I added some hacky code to my wrapper to convert VBA expressions to Python expressions using Regex and evaluate them using Python eval(). The final code is available here.

Sidenote: The above file dropped on the disk by the macro contains one extra null byte than the file which one would get from the concatenated hex string. This difference comes from use of Redim with size len(hexstring)/2 in the macro without using Option Base 1. Due to this, the array index in Redim statement starts from 0 instead of 1, leading to an extra null byte in the end.

Other text strings constructed by the macro are shown below:

The file is created in %TEMP% folder as 1Vqar5tGI51.sak. It is then moved to Startup folder and renamed as WHealthScanner.exe. Finally, the file is executed.

Executable file is a basic malware with capability to run obtained commands and send their output to a hardcoded C2 server, and download and install additional executables. Interestingly, the malware is written in PureBasic which is quite rare. I plan to share brief details on the operation of the malware in an upcoming post.